skip to main | skip to sidebar

A Vision of the Scottish Tory Frontbench

As Andrew notes, word has got round that Annabel Goldie has reshuffled her Frontbench in advance of the election.

Murdo Fraser remains as Deputy Leader, but moves to the Health portfolio, replacing Mary Scanlon. Liz Smith takes over as Shadow Cabinet Secretary for Education having been a junior spokesperson on the subject.

Bill Aitken, who has announced his intention to stand down from Holyrood in 2011 - and if the Tories select anyone other than Ruth Davidson as his prospective replacement then they deserve to lose their Regional seat in Glasgow - has left his front bench role in the Justice portfolio, to be replaced by John Lamont, who was a junior Justice spokesperson and only a fortnight ago was trying to change Parliaments.

Derek Brownlee remains at Finance, John Scott is still at Rural Affairs, David McLetchie remains Chief Whip and is confirmed as Campaign Manager (perhaps unwise, given that he held that post for the election just passed, which was not a roaring success for the Scottish Conservatives), while Gavin Brown becomes "Political Adviser to the Leader".

So what can we say, aside from wondering quite what Gavin Brown's role actually entails (or who was advising the Leader beforehand)? Firstly, Fraser's appointment to Health perhaps suggests that this will be a key campaign issue for the Tories - why else would Goldie appoint the Deputy Leader to the portfolio if it weren't? And what happened to Mary Scanlon? Has she irked Ms Goldie? Or is she standing down like her fellow 1947 baby Bill Aitken, who is after all only six weeks older than her? If he's going, then you can see why she'd be going too. Incidentally, if this is the case, can we expect Ted Brocklebank and Nanette Milne, both born in 1942, to depart as well? If so, this would represent a relatively major infusion of new blood for the Tory Group.

Liz Smith's elevation to the Shadow Cabinet for a subject on which she has been speaking anyway makes sense. And on that basis, it makes sense to appoint John Lamont to Justice as well: he has been speaking on that brief anyhow. Nevertheless, on the basis that Lamont was seeking to head South earlier on this month, this is a little embarrassing, and it speaks volumes about the Group as it is presently composed that Goldie had to bite the bullet, perform the straight promotion and appoint him. Was there no one else? Apparently not. Clearly that infusion is more of a transfusion, and is needed urgently.

One final point: this is a screenshot of the Scottish Tories' MSPs' page, taken this evening: 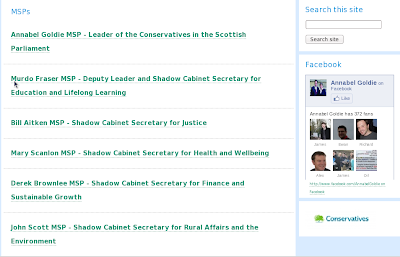 You'll notice, as I did, that it still has Fraser in the Education portfolio, Aitken at Justice and Scanlon at Health. While the news release was posted on the website, the rest of the pages have not yet been updated.

How embarrassing it is for the Scottish Tories, that not even their Webmaster notices a frontbench reshuffle!

How embarrassing it is for the Scottish Tories, that not even their Webmaster notices a frontbench reshuffle!

Ha! Far be it from me to gloat about it... let's just say that it's amazing what you can learn when you're procrastinating! :)